Coconut Oil vs. MCT Oil: What's the Difference? Which Has More Health Benefits? 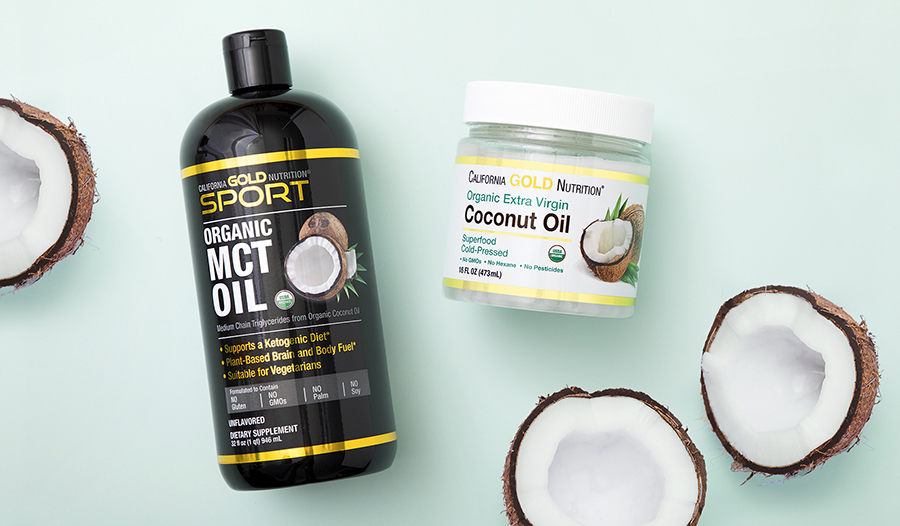 Both coconut oil and medium-chain triglyceride (MCT) oil are popular supplements to support health. And while they have some similarities, they also have some significant differences.

What Is Coconut Oil?

Refined coconut oil is often extracted from coconuts through harsher techniques, which can include the use of toxic chemical solvents. Once the oil is collected, it is refined, bleached, and deodorized. While not a perfect test, virgin coconut oil typically has a characteristic coconut smell and taste. In contrast, refined coconut oil has little scent or flavor, yielding a mostly flavorless off-white oil. Additionally, virgin coconut oil is much higher in phenolic compounds—antioxidant compounds found in numerous popular herbal products, including chocolate, green tea, blueberries, and pine bark extract. Generally, phenolics have antioxidant and anti-inflammatory properties.

As far as oil content goes, coconut oil is over 90% saturated fat. Of these fats, a large percentage are medium chain triglycerides (MCTs). The structure of a fat molecule includes a backbone with fatty acid chains that extend from the backbone. These fatty acid chains can vary in length and structure, giving them different properties. Generally, MCTs have between six and twelve links in their chain. On average, coconut is composed of around 60% MCTs, with the remainder being long-chain triglycerides. Palm kernel oil is the only other common food oil that contains significant MCTs, containing around 50%.

Both coconut oil and MCT oil are sources of medium-chain triglycerides, which have interesting effects on the body. MCT oil is just a more concentrated and refined version of MCTs as compared to coconut oil. However, in MCT products, lauric acid is sometimes removed because it acts similar to longer-chain fatty acids. Similarly, caproic acid is often removed because it is more likely to cause digestive upset for some individuals.

Based on the latest research, there are good reasons for so much interest in supplementing MCTs. Due to their structure, MCTs have unique properties: they are primarily utilized as an alternative fuel source. While other, long-chain fats can be stored in the body, MCTs are readily available to be burned for energy production. This process, called ketosis, is usually only accessible by eating a low carbohydrate diet or fasting. However, when added to the diet, MCTs are a simpler way of acquiring some of the benefits of using fats as a direct alternative energy source. When consumed, MCTs increase ketosis throughout the body.

The Elephant in the Room: Coconut Oil, Saturated Fat, and Heart Disease

First and foremost, it's worth addressing the largest concern around coconut oil. Since coconut oil is mainly saturated fat, many experts recommend against consuming coconut oil due to the potential risks of increased heart disease. While more data would be helpful, the available research does not suggest that coconut oil increases heart disease risk.

Several studies in overweight women have also suggested that coconut oil might reduce abdominal fat, the dreaded "spare tire" of fat around the middle. However, it is worth noting that a study of coconut oil treatment for obesity in men found no benefits, although they also used one of the lowest doses of coconut oil of any of the studies—just one tablespoon per day.

A separate study on Alzheimer's patients supplemented coconut oil over 21 days and found cognition benefits. Improvements in orientation and language construction reached significance. However, not all studies on coconut oil and Alzheimer's have found benefits. A study on coconut oil in Alzheimer's patients did not find cognitive improvements. Of note, a large percentage of patients dropped out of the study due to diarrhea from the intervention, which may have confounded the results. While the study started with 41 patients, only eight completed the six-month course of treatment in the coconut oil group.

Not surprisingly, some of the same benefits seen with coconut oil have also been explored with MCT oil.

MCT oil also appears to increase satiety or fullness after meals, potentially helping with reduced calorie consumption. In addition, the oil appears to increase fat utilization for energy, improving energy production and calorie usage. Both effects may also be helpful for weight management. Compared to coconut oil, the data on MCT oil for helping with weight management appears to be a bit more robust. A review of the research even concluded that MCT oil might facilitate weight control when used to replace long-chain fats.

As we get older, frailty and memory loss are of increasing concern. In elderly individuals, early evidence suggests that supplementation with MCT oil can help to maintain weight and muscle mass. A separate small study on frail nursing home residents found similar results. The residents given MCT oil had improvements in muscle strength and daily functioning.

And similar to coconut oil, data also suggests the benefits of MCT oil for cognitive function. A recent meta-analysis of studies on MCT oil and dementia included 422 participants. The administration of MCT oil was shown to induce a mild state of ketosis. In addition, MCT oil was found to improve cognitive function when assessed through either of two cognitive function evaluations. Between coconut oil and MCT oil for improving cognition in dementia patients, the published evidence is stronger for the benefits of MCT oil. Based on what's known, it's not surprising that MCT oil is being seen as having potential anti-aging benefits and as a support for potentially increasing longevity.

Coconut oil and MCT oil are both sources of medium-chain fats that can help induce a state of ketosis. While the evidence is more robust for MCT oil, they both appear to have potential applications for improving cognition, dementia, and weight management based on the research. However, the research on MCT oil is a bit more robust in suggesting actual benefits in human clinical trials.

Dr. Scott Buesing, ND, has over 15 years of experience as a naturopathic doctor practicing integrative medicine. Dr. Scott Buesing has helped numerous patients improve their health. Throughout his career, he has practiced collaboratively in a multidisciplinary partial hospitalization program for mental health and treated patients struggling with chronic pain at an integrative Southern California pain clinic.  Learn more at buesingnaturopathic.com

The Health Benefits of Coconut Oil

166,444 Views
One of the hottest products in health food stores today is organic coconut oil.

What Is Oil Pulling and What are the Health Benefits?