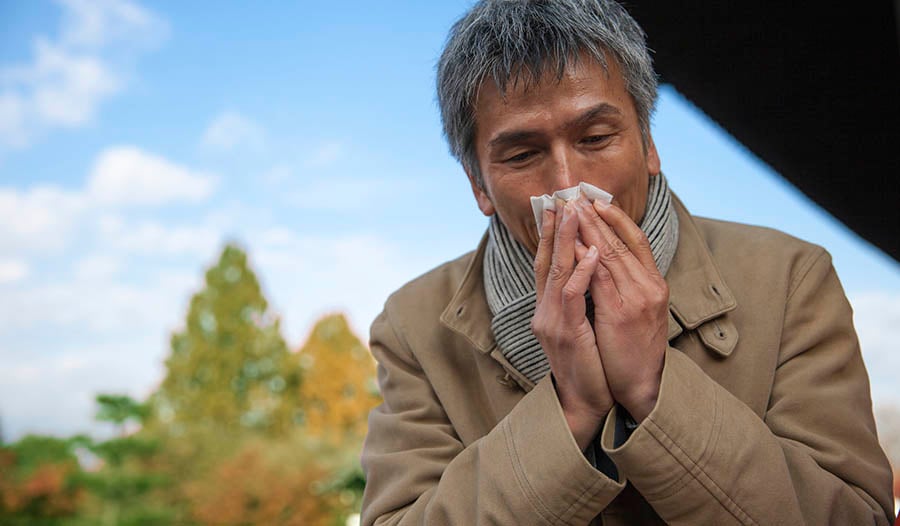 Millions of people worldwide visit their doctors each year with complaints related to their sinuses. "Sinus" is the term commonly used to describe anatomy that doctors refer to as paranasal sinuses. Sinuses are hollow “caves” in the human skull, which are essentially absent in newborns but develop fully by around age 8 and reach their full adult size by puberty.

The sinus tissue generates a large amount of mucus each day, up to 1 pint (473 ml) to be exact.

Mucus entraps viruses, bacteria, fungi and dust particles so that they do not cause problems. Most of this will be swallowed into the stomach where stomach acid kills the pathogens. The mucus will then be digested and further broken in the intestinal tract, where it will be excreted in human waste. A small portion of the mucus will be removed by coughing or spitting.

Unfortunately, a lot can go wrong with sinus cavities. Frequently, they can become irritated by dust,  pollen and air pollution, resulting in allergy or hay fever symptoms.

Sinuses can also become infected with viruses, bacteria, or even fungus. During the first seven to ten days of an infection, a virus is generally determined to be the cause, and antibiotics are not usually needed during this time. Nine in ten people with a viral sinus infection will recover without a pharmaceutical drug but frequently choose a more holistic approach instead.

Unfortunately, it is not uncommon for doctors to prescribe antibiotics during the first week of an infection. It is also common for patients to ask for a prescription during this time.

One in ten people may ultimately develop a secondary bacterial infection, usually the result of the virus infection having weakened the immune system.  Should this occur, a doctor may prescribe antibiotics. Those with a sinus infection that does not improve with at least two courses of antibiotics should see a sinus specialist (known as an otolaryngologist ) and be evaluated for a fungal infection. Also, if an infection is ruled out,  chronic sinus congestion could be due to food sensitivities.  I recommend those being treated with antibiotics take a probiotic supplement to help protect the gut. It is not uncommon for antibiotics to kill off the good bacteria, which leads to an imbalance in the intestines, resulting in diarrhea.

Symptoms of a sinus infection:

In some, excessive mucous production occurs, which can result in chronic drainage of mucus down the back of the throat. Doctors call this post-nasal drip. It's a condition that affects millions, and not a day goes by that I do not encounter a patient with post-nasal drip symptoms.

Not everyone with sinus congestion will develop infections. Some simply have breathing difficulty and chronic allergy symptoms due to sinus inflammation.

Specific food avoidance, medications, minerals, vitamins, essential oils, and homeopathic remedies can all be considered as options to help one prevent allergies, nasal congestion, and ultimately infections of the sinus tract. Maintaining good sinus health is crucial to overall health and well-being.

Food Sensitivities Can Cause Sinus Congestion

From age 18 to 41, I suffered from chronic post-nasal drip, a sign that I had a chronic sinus problem. I was fortunate to not develop infections, but I had persistent sinus pressure, a chronic cough, and excessive mucus production, which resulted in a post-nasal drip. After realizing that dairy may be my problem, I decided to omit cheese from my diet.  I had already eliminated cow’s milk while in college. After a few days of a cheese-free diet, I noticed my sinuses cleared up. For the first time in over 20 years, my post- nasal drip and cough went away. If I consume cheese, my symptoms would reappear for about three days.

I immediately started making the same recommendation to patients who had similar sinus issues. In addition, I recommended patients eliminate dairy, wheat (gluten), and corn for about 2-3 weeks. At that time, they could choose whether to re-introduce the food. The majority have improved by eliminating dairy while for others it was wheat and corn causing the issue. As a result, I have had numerous patients with chronic sinus symptoms improve and many have prevented recurrent infections.

Conventional medicine advises the following to help treat and prevent recurrent sinus infections and allergy related symptoms. In the scheme of things, both doctor and patient have a limited arsenal using this approach.

If a person has an upper respiratory infection, avoid being in their presence. If you are around someone with an upper respiratory infection, frequent hand washing with soap and warm water helps prevent infection. Avoid rubbing your eyes or nose with your fingers, especially if exposed after shaking somebody’s hand. Consider using a triclosan-free natural hand sanitizer, which may help reduce your risk of infection.

Studies show use of complementary and alternative treatments for prevention of sinus problems and allergy control is common worldwide. Most sinus infections start off as a cold, or as doctors call it, an Upper Respiratory Infection (URI).  Therefore, preventing a cold, which is caused by a virus,  is crucial to preventing sinus infections.  If a food allergy is involved, then that food should be avoided. Pollen allergies can also predispose an individual.

Zinc is a mineral. Numerous studies show benefit in preventing the common cold, which can lead to a sinus infection. A 2016 study in the British Journal of Clinical Pharmacology concluded “common cold patients may be encouraged to try zinc lozenges for treating their colds”  while a 2017 study concluded “common cold patients may be instructed to try zinc acetate lozenges within 24 hours of onset of symptoms.”

Starting zinc lozenges as soon as possible is advised. This important mineral should be kept in one’s medicine cabinet so it can be started as soon as symptoms are felt. Another 2017 study showed both zinc gluconate lozenges and zinc acetate lozenges are equally effective. A dose of at least 30 mg is recommended.

Vitamin C, also known as ascorbic acid, has been recommended to help prevent the common cold for decades. Humans have a genetic mutation which makes us unable to make ascorbic acid. A 2014 study showed that vitamin C could reduce risk for developing a cold and also reduced the duration of the cold when compared to placebo (sugar pills). Other studies showed those under “physical stress”, we're more likely to benefit from vitamin C and cold prevention. Reduced respiratory infections result in fewer sinus infections.

Low levels of vitamin D have been shown to be associated with increased risk for viral infections and sinus polyps, both of which increase one’s risk of developing a sinus infection. Optimizing vitamin D is a good way to prevent this. Most need 2,000 to 5,000 IU daily of vitamin D. Read more about the health benefits of vitamin D.

Lactoferrin is a protein which has both antibacterial and antifungal properties according to studies. This protein is usually found in the tissue of the sinus passages. For those with chronic sinus infections, supplementing with 300 mg daily may be helpful.

NAC is a supplement which can help those with chronic sinus infection break down mucus. NAC can be taken one to three times per day. The max daily dose is 1,800 mg.

Eucalyptus has been used for centuries as a natural nasal decongestant.  Some use it as an essential oil and mix it with a diffuser to help with chronic sinus inflammation.

Xylitol is a non-absorbable sugar. When used for chronic sinusitis, it can help treat current infections and help prevent additional bacterial infections. A 2012 study in Laryngoscope concluded “Xylitol in water is a well-tolerated agent for sinonasal irrigation. In the short term, xylitol irrigations result in greater improvement of symptoms of chronic rhinosinusitis as compared to saline irrigation”.  In other words, a xylitol nasal spray should be considered.

Frequent Use of Neti Pot or Other Sinus-rinsing Products.

Nasal and sinus rinsing goes back to ancient India and is used in Ayurvedic medicine. A 0.9% nasal saline solution can be inserted into the nostrils using a mist, spray or neti pot technique.

Steam inhalation, 3-5 times per day can be helpful for a person with symptoms. This can be done taking a hot shower or by placing a warm towel over your head or breathing warm air from a warm air humidifier.

Probiotics are an up-and-coming treatment for chronic sinus disease. A 2016 study in a popular allergy journal concluded that nasally introduced probiotics could help chronic sinus problems. There are a lot of studies demonstrating the importance of a healthy gut microbiome and its role in overall health. Evidence from a 2017 study suggested that “an unhealthy gut increases the risk for sinus problems and inflammation in the sinus passage”. Therefore, supplementing with at least 5 billion units of probiotics daily is advised.

There are several homeopathic remedies on the market which show promise based on user feedback. These should also be considered.

Lastly, one has a lot of tools available to help them prevent upper respiratory infections, chronic allergies and sinus problems. Maintaining good sinus hygiene is crucial to prevent misery,  illness, missed work and school days.   A healthy diet and consuming the appropriate supplements can play an important role.

The Benefits of Nattokinase for Sinus Health

Chronic nasal and sinus inflammation or chronic rhinosinusitis (CRS) is one of the most common chronic diseases in adults. It is characterized by persistent symptomatic inflammation of the nasal mucosa and sinuses. A new study indicates that nattokinase, an enzyme from Nattō, a traditional fermented food from Japan can produce incredibly powerful effects in improving this condition. The breakthrough is that CRS does not tend to respond to conventional drugs, but may respond to nattokinase.

How to Relieve Allergies Naturally

The change of seasons can sometimes bring more than just a shift in the weather or a transition of colors. For the hundreds of millions of people worldwide who suffer from seasonal allergies, it brings aggravating symptoms like sneezing, stuffy nose, sinus pressure, and watery eyes.

A rational approach to indigestion. The term indigestion is often used to describe heartburn as well as feelings of gas or bloating after eating, stomach pains, or fullness in the abdomen.